Introduction of the Major Scale Chords

Most of the popular songs before and even today have simple chord progression. There’s even a study that using only the chord G, Em, C, and D, you can already play a lot of songs. How is this even possible? Some sound complicated but they are just using any of the four chords.

Songs differ in key and definitely can affect its feel if you try to change its key, but if you apply a little music theory and put everything in one same key, let’s say in the key of G, you can definitely see that most of them uses the four chords mention above. Here’s an example:

As you can see, these are some popular songs and they use those four chords most of the time. The one thing they differ is the key. But why do the composers have used chords in common? And why these four chords is widely used?

It’s because they use, if I’m not mistaken, the MAJOR SCALE CHORDS

What is the Major Scale?

Let’s try analyzing the pattern. There are 8 notes in the Major Scale where the last note is the higher octave of the first note. The first note is called the Root Note or the Tonic or the Key. It is the most important note in the scale. That’s why most songs start with the chord equivalent to its key because this chord is trying to establish the key.

C to D is two semitones higher. Refer at the table. D to E is also two semitones and so on. Try analyzing the pattern.
For reference, I will use the words WHOLE STEP and HALF STEP.

Let’s try on the Key of D. Practice in on your own. It’s easy to remember. The first and last note is always the same. 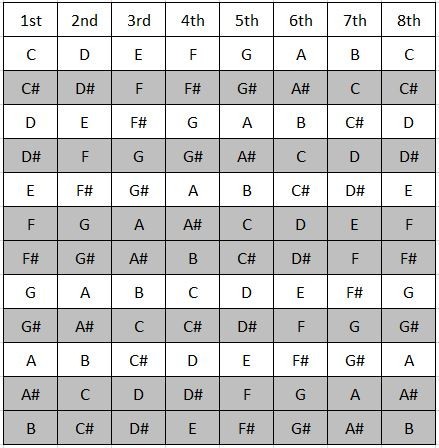 Major Scale of Every Key

The table above shows the notes of every scale. I highly suggest that you FAMILIARIZE yourself to the five keys that are not highlighted if you are a beginner because those keys are the easiest to play with.

Figuring out the Chords of Every Scale

Chords are very important for us because it is what gives life to our music. Every song we know has chords in it and if you are an experienced player, you will definitely remember some patterns that are repeated from every generations. Have you ever wondered why those chords sounded good together? It’s because they all use the notes in the same scale which is, the most common scale, the Major Scale. And now, we will tackle the chords of the major scale.

This is how you will figure it out. Every chord of the major scale is a triad, meaning consists of three notes. So what are the three notes? For the first chord, take the first note, third, and fifth. Just jump over one note until you completed three notes.

The first chord has the notes: C – E – G. If you are a piano player, I’m sure that you will recognize what chords is made of these three notes. It is the C Major. The second chord will be consisting D, F, and A note. The third will be E, G and B note. Hopefully you got the pattern. In summary:

To easily remember this, just remember that the 1st, 4th, 5th are the Major. The 2nd, 3rd, 6th are the Minor. The 7th is Diminished. Make sure you memorize that. If you remember the notes of every scale then just add the Major and the Minor and you will have the Major Scale Chords. 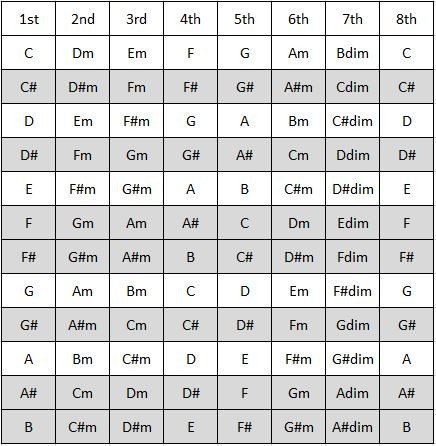 Major Scale of Every Key

This table shows the Major Scale Chords of every Key. Again, FAMILIARIZE yourself to the five keys that are not highlighted.

I will not go into history on how it was made or who’s Nashville. Nashville Number System is used to make it easier to remember that chord families. Instead of using the chord itself, it uses the Roman Numerals. Capital Letters for Major chords and small letters for Minor Chords.

But in order to use it, you need to at least be familiar on all the keys. Let’s say we have a chord progression of G – Em – C – D and it’s in the key of G. To use the Nashville Number System, we’ll translate it into the Roman numerals.

The Chord you need to be at least remember in every key is the:

The 1st, 4th, 5th and 6th or the I, IV, V, vi chord are the most important chords in the key so make sure to remember it. Just look at the table above and memorize it. It is easy since most songs uses this chords (e.g G – C – D – Em)

How can you use it?

A. Construction of Chord Progression

You should try experimenting and use the seven chords in the major scale and know what combination will sound better. Using the Major Chords or the I, IV, V and the vi will surely sound good no matter the order they are used.

You should also try adding the ii and iii chord. the vii chord or the DIMINISHED is not used that much on the contemporary or the pop genre so I suggest that don’t use it that much. There is way to use which I will tackle on another article. The diminished chord is much more useful on jazz.

I have made a lot of progression using only the Major Scale chords. I will give some examples but I suggest that you experiment on your own.

Try it on different keys. You can also substitute one chord from any other chord and see what it will sound like.

Knowledge about the Major Scale Chords can make it easier for you to build good melodies. And if you have a good melody first, it will be easier for you to know what chords to use. Since we also have the idea that most popular songs nowadays use very simple chord progression from the major scale, we can also do that. Some songs use only four chords and repeat it until the end.

As I mentioned earlier, the most used chords that I also use in songwriting is the I, IV, V and vi chord of any key. But I also use the ii and iii at times to give another flavor to the songs. If you like the music of Ed Sheeran, he is just using basic chords from the Major Scale but he was able to produce music that is known globally. Who knows and your song might be the next. Mastering the Major Scale will be a skill you need.

Changing keys is definitely hard since all chords will be changed as well. But if you are familiar with the chords of the Major Scale and the Nashville Number System, it will be easy for you to transpose to another key.

Let’s say you have a song in the key of A and you have the chord progression of F#m, D, A, E and you want to transpose it to key of D. The first thing you can do is to translate it to Nashville Number System.

D. Figuring out the Chords of a Song

In order to figure out the chords of a song, you need to know its key first. It requires time before you can be good at this but you can try by strumming one major chord and listen if it sounds similar to the song. But if you are really having a hard time, you can search for it in the internet, however, this will limit your improvement.

One thing I do is I TRY TO KNOW THE KEY BY MYSELF, then check it on the internet to see if I’m correct. After 1 year of doing that, I am now capable of knowing the key without checking it out on the internet.

The key of the song is like your home. It is important to know the key because it will be your basis when figuring out the chords. Instead of trying a lot of chords, you will now only have SEVEN chords to experiment with because usually, the songs are just using chords that are in the Major Scale. So if a song is in the key of C, just visit the list of the chords in the key of C and use those 7 chords to know what chord the song is using.

This is what I do most of the time especially if the song is too old or there is no mp3 available. I experiment with the seven chords until I got it right. As you became experienced with this, you’ll notice that a lot of patterns are just being repeated.

By just hearing, I usually know what chord will be used next when this chord is used. Let’s say if you are using the I chord, chances are that it will use next the vi chord or the IV chord. Things like that is what I accumulated trying to figure out the chords instead of searching in the internet. It’s hard at first but you will be good at this in time.

Major Scale Chords is definitely useful especially in our times right now. Many songs uses this scale and it sounds good even without the complicated chords. Mastering this scale will open up many ideas to you including good melodies, strong musical background, beautiful chord progressions and many more.

If you have questions, please leave a comment below and I’ll be happy to answer the things that you want to know. Also if you are a guitar player and you have understand this lesson, I suggest that you check also my article about using the Capo since what you learned here will be useful in understanding how to use capo.